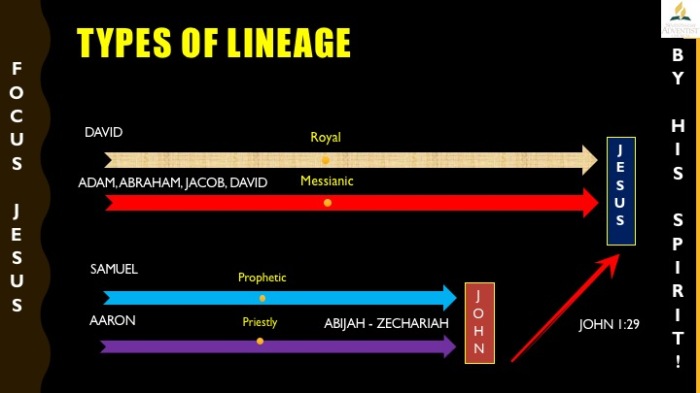 In Gospel of Matthew, the first chapter lists the genealogy of Our Lord Jesus Christ. Thus there were fourteen generations from Abraham to David, fourteen from David to the exile to Babylon, and fourteen from the exile to the CHRIST. (Matthew 1: 17)

On the other hand, we have John the Baptist. Who is from two important line in the Bible history. John the Baptist comes from the PROPHETIC LINE and PRIESTLY LINE. The Prophetic line does not necessarily have to follow the bloodline, whereas the priestly line follows bloodline. John has them both. He is coming in the prophetic line as well as the priestly line. Let us pause for awhile and ponder on these two lines. Prophetic lines have been actively proclaimed the salvation of mankind and have introduced the Messiah/the Anointed One. The Priestly line was appointed by God to prepare Israelites mind on the promised coming Saviour through the sanctuary cultus and symbols. The Sanctuary and all the worship rituals and sacrifices are pointing to the coming promised Messiah the Lamb of God.

In John 1:29, John the Baptist as the representative of both Priestly line and the Prophetic line is preparing people and pointing to Jesus and said, “Look, the Lamb of God, who takes away the sin of the world!”. In this statement from John, it explains to us that the fulfillment of the two major lines, the priestly and the prophetic took place at the river Jordan. John is the meeting point of these two lines. Furthermore, at this same point in the history,  when John the Baptist mentioned the above statement, the priestly and the prophetic, the Messianic and the Royal lines met in one place. This meeting point in the history was witnessed by the God the Father and the Holy Spirit. This witnessing act established and acknowledged by introducing of one ultimate line that comes down from heaven.

Therefore, the two lines that represented by John the Baptist are Prophetic and Priestly lines. On the other hand, Jesus represented three major lines. Messianic, Royal and Divinity line. In John 1, all these five lines met at the river Jordan on Jesus’ baptism. All the directions of the lines are pointing to our Saviour Jesus Christ. These lines are not only pointing towards Him, but they merged in Lord Jesus Christ. This is why Lord Jesus is above all Kings, above all priests, above all anointed ones, and SON OF GOD. The Lord Jesus is our only hope and the salvation is only through Him. God bless you.

Previously, in my post entitled Why Jesus Alone Qualified? Snapshot on Book of Hebrews I mentioned that there are three areas in which Christ alone qualifies to provide a perfect salvation:

(3) He alone qualifies in His position to effect salvation (10:1

Today, I would further our studies on why Christ alone qualifies in His person to attempt salvation?  The author of the Epistles to the Hebrews spans the whole realm of creation, and the entire span of time to see if there could be found someone who might qualify as the Savior of men. In a simple word, he was showing us the macro picture of the entire realm of creation all the way to the micro picture of it. He affirms that none but Deity Himself can possibly qualify for the standard set by Deity for the salvation of lost mankind. He identifies the only One who can qualify as the Son.

In order for us to understand even better, I would suggest the readers to study the Epistle to the Hebrews from chapter 1 until chapter 4 verse 13. In this first unit of the book, we can have four subpoints that proved the idea of Christ alone qualifies in His person to attempt salvation.

In the second section of this first part of the Epistle, the Son is “so much better than the angels” (1:4). This interesting point is proven by quoting seven different Old Testament passages in Chapter 1, and three more in Chapter 2.

In summary, the Son is greater in two ways:

(2) He identified Himself completely with humanity (chapter 2).

Angels are always angels so they cannot do what Christ did for man. Angels serve man; but the Son became man in order to serve in a far greater capacity.

According to the Torah and Jewish tradition, Moses is considered as the great deliverer of the nation. The author is making a point that Moses delivered the entire nation from bondage but Jesus Christ is even greater. Jesus delivered the entire humankind from the bondage of sin. Furthermore, in this part, Jesus is the Architect and builder of the house (3:3), whereas, Moses was a servant in the house. While Moses was a servant in the house but Christ is the Son (3:5-6). As the Son is superior to the servant of a house, likewise was the Messiah superior to Moses. This is the second point that proved that Christ alone is qualified as a person to attempt salvation.

In Hebrews 4:8 the word “Jesus” is the Greek word for “Joshua” and so should be understood. Joshua led the nation into the land, but he could not give then rest. Since a rest was promised, there remained One who is greater than Joshua to come and bring them into a place of SHABBAT because He had “ceased from His own works.”

The exhortation is given to the Hebrews to “enter into that rest” (4:11). The throne of grace is the place of rest (44:16). The rest is provided because a greater than Joshua ceased from His own work as God did from His. He is the LORD of the SHABBAT!

The illustration is that 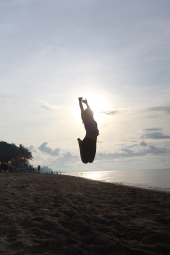 of God’s rest of creation. When He finished creation He pronounced everything “very good” and then He experienced a Sabbath rest. Then something happened. Sin came in, and there was no more rest for God. Only after the Lord had a redeemed people, redeemed through blood, He reinstitutes the SHABBAT rest for them.Yet there still was no rest for God. Only after Christ exclaimed: “It is finished” there was rest. Today Christ sits on high in the Throne of God because the work is over. We can enter into His rest or SHABBAT of a completed work. This is why we are still observing SHABBAT as a sign of this Everlasting Covenant and Remembering God on Lord’s Shabbat day. Have you done this? I would extend the invitations to you to enjoy and experience the Shabbat and Salvation. God bless you.

There are three areas in which Christ alone qualifies to provide a perfect salvation:

One of the world’s famous board game is Chess. The objective of this game is to ‘checkmate’ the opponent’s king by placing it under an inescapable threat of capture. In other words, the king is cornered in various ways. The king can’t move and loses the game.

The Bible tells us that Satan is cornered in every ways and he is checkmated by Jesus. He has no way to run, he is loser and he knows it. The book of Genesis broadcasted his defeat saying God will bruise the serpent’s head (3:15). This message did not stop there. Constantly, during the course of bible history, God portrayed that God is the VICTOR and Satan as the LOSER. We observed how God has been victoriously defeated recalcitrant Satan in the life story of Job. God even revealed to us in Isaiah, Ezekiel, Zechariah, Daniel and Revelation that victory belongs to God and His people alone. Rebellious Satan knows that he can’t go against Creator and His people.

After Jesus’s 40 days of fasting, Lord Jesus verified to us that He is Victor over Satan. Jesus Rebuked Satan! This is not the first time. Prophet Zechariah wrote that the LORD said to Satan, “The LORD REBUKE you, Satan! Indeed, the LORD who has chosen Jerusalem REBUKE you! Is this not a brand plucked from the fire?”(ESV) – Zechariah 3:2. In New Testament, Apostle Paul penned to the believers in the city of Rome, saying “The God of peace will soon crush Satan under your feet the grace of our Lord Jesus be with you” (ESV) – Romans 16:20. Satan is portrayed in the Holy Bible, as one who has been constantly defeated. He is defeated in heaven and also in earth. Apostle Paul continues by giving us a greatest assurance saying that, “For He (Jesus) must reign until He has put all His enemies under His feet” (ESV) – 1 Corinthians 15:25. As it was destined in the Heaven and Garden of Eden, he was defeated; he will be crushed and he will be eradicated forever.

At the Patmos Island, Apostle John the Revelator penned what was revealed to him by Jesus regarding Satan’s destiny. Revelation 20:7-10 says, “And when the thousand years are ended, Satan will be released from his prison and will come out to deceive the nations that are at the four corners of the earth, Gog and Magog, to gather them for battle; their number is like the sand of the sea. And they marched up over the broad plain of the earth and surrounded the camp of the saints and the beloved city, but fire came down from heaven and consumed them, and the devil who had deceived them was thrown into the lake of fire and sulfur where the beast and the false prophet were, and they will be tormented day and night forever and ever. (ESV) Finally, Satan will be eradicated forever.

Jesus will reign forever. All we have to do as God’s people are to Love Jesus and be His allegiance. When Victorious Jesus is for us, Loser Satan couldn’t touch our life. I’m leaving you with this assurance that we are chosen to be victors and not losers. As long as we are in God’s covenant, we are VICTORS and this is our destiny.

Prayer: Dear Victor Lord Jesus, thank you for your marvellous protection and promises of victories in our life. Continue to protect and fight for us. Amen.